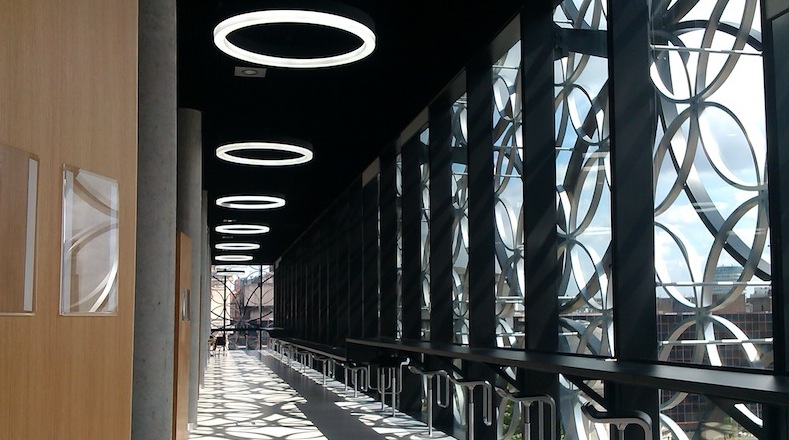 Birmingham’s new £188 million library will not have a detrimental effect on local library services.

This was according to Brian Gambles Chief Executive at Library of Birmingham Development Trust who was speaking as bournvillevillage.com was given a preview of the new building. 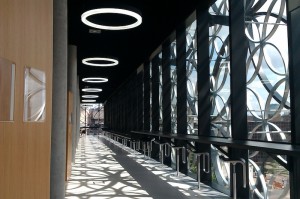 The new library is designed by Dutch architects Mecanoo

The replacement for the former Central Library boasts of being the largest public library in Europe. Designed by Dutch-based architecture company Mecanoo, it has come at a cost of £188.8 million.

Deputy Leader of the Birmingham City Council, Ian Ward said that three and a half million visitors are expected every year and that the new library is a “once in a generation opportunity to change the physical, cultural and economic face of the city”.

Brian Gambles said they were concentrating on how the money invested into this library would help the 39 other libraries in the city and not treat them as outcasts while ensuring that connections with them are “strongly made and strongly felt”.

When asked about the opening hours of Stirchley Library on Bournville Lane being reduced, Brian said there was no direct link between the funding given to the central library and the cuts the community libraries were facing.

He explained that no community library in Birmingham had faced closure so far and our libraries have been well protected till now from the economic turmoil the Birmingham City Council has been facing.

In a council meeting in late July, it was decided that the new library would come under the Development and Culture Directorate while other community libraries come under the Local Services. Mr Gambles insisted that this was a positive thing and a chance to create specifications of how the main library and the community libraries support each other.

A ‘People’s Palace’
Squeezed between the Baskerville House and the REP, the new library is part of the composition of the ‘three palazzos’ as described by its architect Francine Houben. She said the building is a ‘People’s Palace’ that brings coherence to a city of diversity.

While it’s hard to miss the five thousand odd inter-locking metallic circles that envelope the outside of the building, it’s the effect of beautiful patterned shadows they cast on the library flooring inside that is worth mentioning.

The heart of the library is a sequence of rotundas that add to ventilation. Filled with plush greenery and flowers (with even the chance of spotting the odd bee or butterfly swooping across in Summer), the secret garden situated at the 7th level or the discovery terrace at the third level not only add to the green theme that the building follows but also act as perfect spots to get a magnificent view of Birmingham in all its glory.

The Shakespeare Memorial Room, though smaller in size when compared to the rest of the rooms is one of the features that have been retained from the original Victorian library. Carefully restored, intricately decorated panels that now adorn the room were originally built by craftsmen from the Midlands in the mid 19th Century.

There is a children’s library complete practicing rooms where the young musicians can kindle their musical geniuses. Midlands based film works along with content from the British Film Institute find a place in the National Archive.

The digital library, radial bookshelves, grand escalators, glass lifts and off course, massive rows of books (about 400,000 of them in total) and DVDs deck the structure. An outdoor amphitheater set below ground level is a platform for musical/literature performances that can even be viewed from the seating facilities at ground level.