A group opposing the plans to bring two new supermarkets to Stirchley has offered an alternative vision for the area including a new swimming baths and art gallery. However, their ideas have been labelled ‘naive’ by a local councillor. 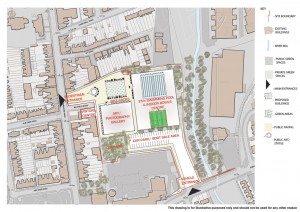 ‘Super-Stirchley‘ are a local pressure group who object to the plans by Asda to bring what would be a third supermarket to the area once the new Tesco is completed. The group have drawn up a plan of their own for the former Arvin Meritor site off Fordhouse Lane currently being targeted by Asda.

Local social enterprise baker Tom Baker who is moving his shop to Stirchley high street later in the year said: “I am furious that the councillors have let the proposed ASDA site sit empty for so long”.

“Birmingham desperately needs more swimming and leisure provision and a council with any vision could see that a site such as this is perfect for such new facilities – it would act as a true destination for Stirchley and would lead to much-needed regeneration of the area and boost the local economy, whereas the supermarkets are sucking money out of the local economy”

However local councillor Nigel Dawkins responded to the Super-Stirchley proposals by calling then ‘naive’. He said: “Super Stirchley seem to have a pathological hatred of supermarkets. However the truth is Stirchley has been in decline for the last 20 years, not because of supermarkets coming to Stirchley but because small and medium size retail stores have been vacating Stirchley.”

He continued: “Super Stirchley naively thinks that the city council should instead take over this very value piece of private property [the Arvin Mertor site] and build an art gallery and some bike racks. Who do Super Stirchley think will pay for their grand schemes? The City Council’s limited funds are already overstretched as we struggle to maintain existing services in the current difficult economic climate.”

Tom Baker responded that Super-Stirchley does not have a ‘pathological hatred of supermarkets’: “the main thrust of our campaign is that Stirchley does not need three large supermarkets within half a mile of each other. Stirchley already has a large successful Co-op supermarket and Tesco have planning permission for a second. Having a third in such a small area is preposterous and will ensure the final demise of Stirchley high street and render Stirchley village as mere scenery around a supermarket landscape.”

Tom Baker has accused the City Council of focusing too much on city centre flagship projects and in defending Super-Stirchley’s plans said: “Of course the plans are ambitious, and we accept anything so grand is going to be an uphill struggle to find funding for, but the point of the drawings is that they show a real social vision for Stirchley that Birmingham City Council and our elected representatives are sadly lacking. Cllr Dawkins has represented Bournville Ward for 11 years now and under his watch, Stirchley has slipped in to what his colleague Cllr Huxtable describes as “terminal decline”. Ten years ago the council was not broke, and yet Stirchley seems to have conveniently slipped through our councillors fingers.”

UPDATE: Cllr Tim Huxtable responded to our request for a response to the Super-Stirchley plans by saying:

“I am thinking of nominating the [Super-Stirchley] press release (PDF) for the Booker prize for fiction.

There are numerous statements that are misleading at best and inaccurate at worse. The press release does not mention finance at all and does not even try to cost their plans, in terms of buying the land from the private landowner, constructing the buildings and public realm nor attempt to quantify the ongoing revenue costs of staffing, running and maintaining the buildings and maintaining the public space. It is “cloud cuckoo land” economics.

The regeneration of the northern end of Stirchley, rather than Tesco, is what I and my colleagues “have ceaselessly been working towards for the last ten years”

The City Council has made a multi-million pound investment on part of the former Arvin Meritor with the building of Lifford House, where 700 staff are now based, and associated landscaping. I hardly call that leaving a site derelict!

The indoor bowls centre is to be replaced with a purpose built facility within the Selly Oak Constituency.

The new £190million City Council Library of Birmingham will host a large photographic and archive display for the benefit, in a city centre location, of all Birmingham residents.

Over the last two years, the City Council has invested in a town centre manager for Stirchley and Cotteridge to encourage inward investment into these local centres. The City Council TCM has also helped achieved external funding for independent shops to set up.

The new grassroots food and arts scene, while welcome, will not fund the major regeneration proposals included in both supermarket proposals, especially the Tesco application. Many of the derelict proposals at the northern end of Stirchley have not happened because of the Tesco development (but because of normal relocation) and the Tesco proposal will bring these properties back into economic/community use as well as creating new retail units on the development site.

A community orchard has been created already in Hazelwell Park adjacent to the site.”